On a long trip from Boundary Waters Canoe Area Wilderness (I plan to write a botanical trip report someday) returning home to Ann Arbor, I stopped by the prairie beach park near Fenton, Michigan, in early September 2014.  I wanted to see how the prairie was growing after spreading seed and planting late Spring 2014.  Here is the post detailing the site and my installation work.

Questions I pondered before arriving:  did the shrubs and plugs from Wildtype take?  Did the Bur Oak sapling, which received an unknown regimen of additional watering, survive its transplant?  What species germinated from the seed mixes?  How vigorously did the prairie grow? 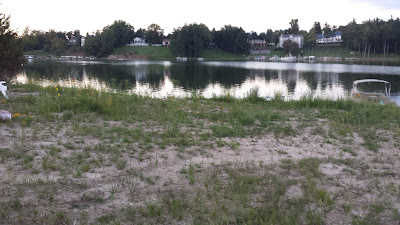 Well, initial observation was that the prairie growth was quite thin.  Not surprising given that seeds were only spread less than four months prior.  The ground was cracked due to the shrinking drying clay soil.  I observed many plants sprouting up from inside the cracks where some lucky seeds must have got caught in a good spot to germinate. 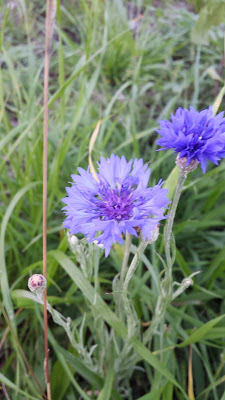 Upon closer inspection though, good things were happening.  From the annual mix, I saw Bachelor's Button (photograph above), Partridge Pea, Spurred Snapdragon, and Plains Coreopsis.  From the short-grass mix, I spotted Panicum virgatum, Symphyotricum laeve (formerly Aster laevis), Cassia fasciculata (this was in both the annual and Dry-Shortgrass-Mix), and, well, many unidentified plants consisting of basal leaves. 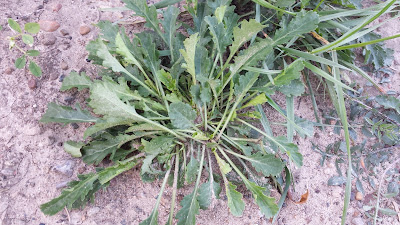 These basal leaves belong to a species, which will be identified soon. 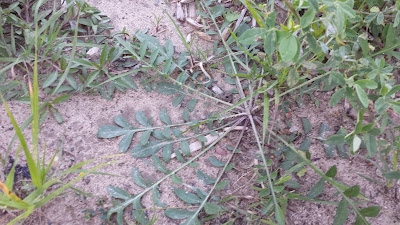 Also, not yet identified.  Most native flowers require more than one full season of growth before producing flowers.  So, observing plants consisting of just basal leaves indicated a germinated seed, or in other words, a step in a good direction.  From the plugs, I also saw specimens of Asclepias syriaca, Physostegia virginiana, Rudbeckia hirta, and Eupatorium maculatum. 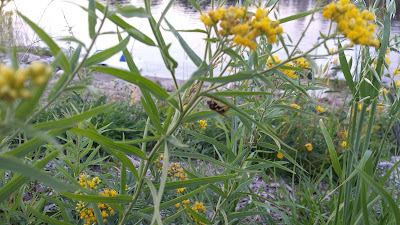 Although insects were already making use of the Euthania graminifolia, which was another planted plug, the desired plants seemed few and far between.  The Quercus macrocarpa and Cercis canadensis fortunately seemed to be sticking, as was the Ribes americanum shrub.  Very happy about that Burr Oak, which has a reputation for doing well in clay soil situations. 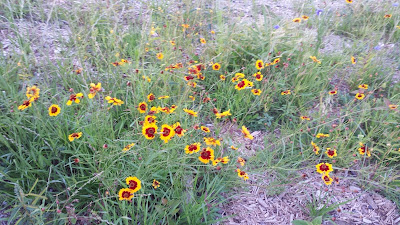 This area of the prairie was thick with Plains Coreopsis, so definitely some good things were happening.  As indicated in the previous post about this project, the most important component of establishing a prairie was patience, patience, and more patience.  The seeds have been sown and quite possibly will germinate some day.  I waited a year after visiting to write this post.  So, since I have now seen the prairie in late Summer 2015, I can safely say I feel a lot better about this project, .  Here is the post about that visit.
Posted by Pat Reed at 11:42 AM